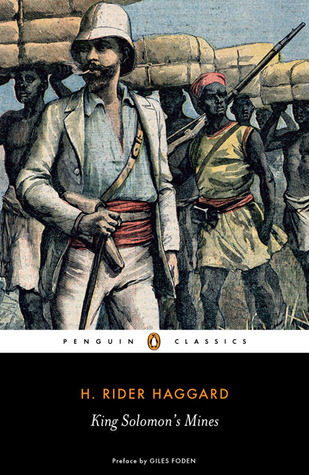 Take a dash of daring do, throw in a bit of casual racism, a pinch of beautiful prose and a dollop of nail biting tension and what do you have?

Look, let’s get the ‘casual racism’ out of the way. Yep, I know that it’s a classic and therefore a wee bit antiquated but still … it  yanks my chain to read Allan Quatermain’s condescending attitudes towards those of a different skin colour.

But no amount of beauty or refinement could have made an entanglement between Good and herself a desirable occurrence; for, as she herself put it, “Can the sun mate with the darkness, or the white with the black?”

I’m not going to rant and rave, though. I’m simply going to say this: however old the book, wrong views are still wrong. Being a ‘classic’ doesn’t make it okay. Mmkay?

Right, and now I’ve vented my chief problem with the story (the other one is elephants. And the killing of them. WHY, Allan? Did you know that elephants walk on tip-toe. Why would you slaughter creatures that are literally charging on tip toe towards you? Me no understand) let’s move on to the rest of this recounting. 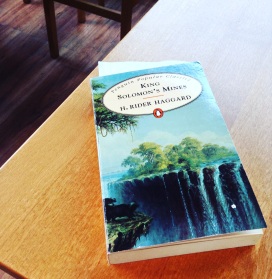 King Solomon’s Mines tells of the search by Sir Henry Curtis, Captain John Good and the narrator, Allan Quatermain, for Sir Henry’s younger brother George. He has been lost in the interior of Africa for two years in his quest for King Solomon’s Mines, the legendary source of the biblical king’s enormous riches. The three companions encounter fearful hardships, fierce warriors, mortal danger and the sinister and deadly witch Gagool.

First, let me say that Sir Henry is my favourite character by far. I love him. He reminds of Radcliff Emerson and that, my friends, is a splendiferous thing. He’s big, strong and brave and can remove an evil man’s head with ease (it’s an important life skill).

Whilst I didn’t like Captain John Good too much, he still managed to tumble down slopes, nearly die in caverns and escape drowning all with an eyeglass screwed in. And if that isn’t the definition of epic, I don’t know what is.

And also, there’s this:

Whilst we were at Durban he [Good] cut off a Kafir’s big toe in a way which it was a pleasure to see.

Personally I don’t find toe removal a pleasure to see. In fact, I’d rather avoid it. However, I do find the rest of that passage amusing:

But he was quite nonplussed when the Kafir, who had sat stolidly watching the operation, asked him to put on another, saying that a “white one” would do at a pinch.

Allan Quatermain is … an interesting chap. A hunter, he’s short, proclaims himself a timid sort of man and at the beginning, was annoyingly voluble. (I’m a timid man, he says. But not too timid to make long speeches of drawn out deliberation it seems.)

I warmed to him a little as thing went along, because he was quite an interesting character after all. (And yes, I’ve used ‘interesting’ twice to describe him, but it’s true.) He’s not entirely bland nor entirely bigoted – his opinions, though wrong, are a product of his time. Even his big game hunting was considered fine and dandy back then. (Even though I baulked at the wholesale slaughter of those poor, innocent elephants.) He calls himself a coward and yet still charges into the fray.

While I wouldn’t say, ‘My word, that Allan Quatermain!’ (As a matter of fact, I wouldn’t say that to anyone about anyone. But, ahem, that’s beside the point) he’s okay (mostly – those elephants and those views and that- No. Not going there.)

Also: his internal monologues are quite fascinating to read and this one stood out to me amidst the rest:

Yet man dies not whilst the world, at once his mother and his monument, remains. His name is lost, indeed, but the breath he breathed still stirs the pine-tops on the mountains, the sound of the words he spoke yet echoes on through space; the thoughts his brain gave birth to we have inherited to-day; his passions are our cause of life; the joys and sorrows that he knew are our familiar friends–the end from which he fled aghast will surely overtake us also!

Truly the universe is full of ghosts, not sheeted churchyard spectres, but the inextinguishable elements of individual life, which having once been, can never die, though they blend and change, and change again for ever.

Moments From The Story:

I’m going to put this into bullet points. Though do be warned – this is not in chronological order.

Whilst there were moments I did enjoy, as a whole, I didn’t find this book an easy read. I’m not sure if it’s because I wasn’t quite in the right mood at the times of reading or if it and I just weren’t meant to be friends.

One readolution down, five more to go. I’m not sure I can face Crime and Punishment right now, or Lorna Doone. Nope, for the next book off my readolution list, I’m choosing The Three Musketeers because my thirst for adventure has yet to be quenched.

2 thoughts on “Recountings: in memory of the elephants”