Alright, I’ll admit it – a book made me purchase a violin. Which, of course, probably says more about me than I’m comfortable with admitting.

In my defense, read this and see if you don’t want an instrument that understands you and …

… instead of playing any of my classical pieces I drifted into improvising as I went along, and then, as my thoughts took me far away, I gave myself up to them entirely. ‘Dwell deep’ was ringing softly but clearly in my ears. Storms could come and storms could go, but in all and through all were those two little words of peace and quiet. And my violin was with me, and understood my mood. I don’t know how long I played, but when I came to myself and surroundings, soothed and comforted in spirit, I found them all staring at me in astonishment.

But alas, I found to my surprise that … well, to be perfectly honest, Fiction doesn’t always meld well with Real Life. The eardrums of my poor family will attest to this. I can only say that if Heinrich – my violin – truly did translate my moods, than I am in dire need of therapy. Dire need.

What book was this that prompted such expense, such existential crises brought on by Heinrich? 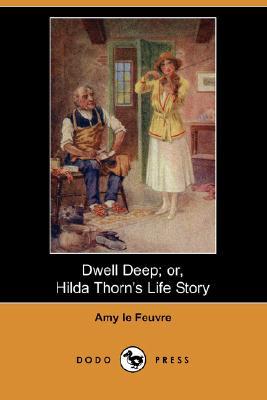 I suppose that I ought to delve into the basic plot. It is thus: a newly converted Christian [Hilda Thorn] goes to live with her non-Christian guardian and his family in the country. Morals and Principles clash and through many trials, Hilda Thorn learns to ‘dwell deep’ as it says in Isaiah.

Now look, here is the link to Dwell Deep – go ahead and read it if you do not want mild spoilers, but otherwise, let us commence this recounting/bookish influence post.

I must admit that I’m not going to talk about the trials that Hilda endures because of her new-found faith. But I’d better note that they are good, encouraging and some of the things she doesn’t do – like dancing – are a matter of conscience. But on the whole, her journey is one that I found to be inspiring.

Now let’s move onto the Recounting side of things. Or, as I like to call it: my Pet Rant.

Kenneth is the son of Hilda’s guardian. This book would not be one that I enjoyed without Kenneth. He teases Hilda, calls her ‘Goody-Two-Shoes’, and watches her narrowly for any chance of slipping up and becoming a hypocrite. He’s just … Kenneth.

‘I don’t think she possesses a temper,’ put in Kenneth. ‘I know for a fact that I often lose mine in trying to make her lose hers!’

It’s a typical case of a boy provoking a girl because he likes her. The proverbial ‘Pigtail Pulling’ and I can’t deny that a delighted part of me whispers: dawww, he wuvs her.

‘Why do you love to make people uncomfortable if you can?’ I said in desperation to him, after he had been chaffing me unmercifully on the same subject before a lot of people in the drawing-room one afternoon.

‘Because it is my nature to, I suppose,’ he retorted. ‘I don’t think anything would make you uncomfortable, Goody! You go serenely on your way, wrapped in a cloak of supreme self-content and satisfaction. Except for bringing a little extra pink colour into your cheeks, which I like to see, no words of mine can ever stir you.’

But alas. A new player appears on the stage. His name is Philip Stanton and he is Perfect For Hilda. Naturally, he and Hilda fall in love.

Now, I would like to make it clear that it is not that I dislike him, he is after all, a good gentleman, a Christian and seems to be a decent sort of chap. And yet – and I’ve just noticed this – he calls Hilda ‘his darling child’. Child. That’s worse than ‘babe’.

Ahem. Anyway, they fall in love and drama ensues when he disappears and will they ever see each other again?

I am a firm believer that Hilda and Kenneth were the perfect match and nothing can tell me otherwise. Philip, you say? Philip who?

‘There are moments, Goody Two-Shoes, when you and your fiddle are before my eyes, that I think I should like to marry you and take you away with me somewhere where you should charm me with those strains continually. Don’t look so frightened. We understand each other. I know you wouldn’t dream of having me, so I am never going to ask you.’

Hilda, you should have waited for him. People change and he could have. Why?!!! You belonged together. Or rather, he needed someone and that someone was you. (I have decreed it, so it must be so.)

And yes, I am passionate about books which are old and no one else seems to have heard of. Join me next week for my recounting of The Rose-Garden Husband, and the week after that: He Fell In Love With His Wife (Don’t worry, I won’t spoil the ah-may-zing plot twist. But here’s a clue: he falls in love with someone who he is possibly wed to. It’s like, totally unexpected).

In the mean time, Heinrich sits, neglected, tucked between my bookshelf and my black leather chair that only ever seems to hold my childhood soft toys, or if I’m in an untidy mood, an array of clothing and books and papers which I fondly call ‘My Doom’.

I’m so, so sorry Heinrich. But do not be frightened – I’ll wring a mood out of you yet, even if it takes me a thousand tries of ‘Twinkle Twinkle Little Star’.