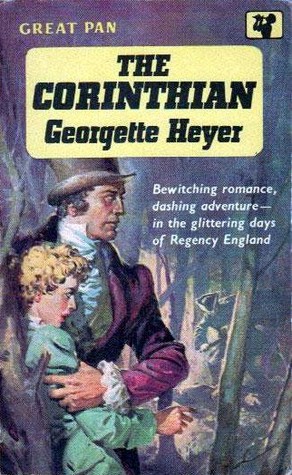 Do you know what I feel like? Cosying up to a nice Georgette Heyer book. I’ve been rereading ‘The Corinthian‘. I brought it to work to read in my lunch break. (I’m not paid to read Georgette Heyer’s books, though wouldn’t that be glorious?!).

And of course I laughed. Or rather, muffled a laugh (I’m learning).

The plot is as follows – Sir Richard is expected to marry a cold woman who does not love him and is marrying him for his purse, rather than his heart. The night before he is expected to ask for her hand, he drowns his sorrows in gambling and alcohol (personally, I like to drown mine in tea). On the way home, he notices someone climbing out of a window.

His fate is sealed.

“No use it, it still seems devilish odd to me. Females don’t drop out of windows.”

“Well, I didn’t drop out precisely. I climbed out, because I was escaping from my relations.”

“I’ve often wanted to escape from mine, but I’ve never thought of climbing out of a window.”

Pen Creed is running away – but let her explain in her own words:

“Because,” said Miss Creed mournfully, “I am cursed with a large fortune!”

Sir Richard halted in the middle of the road. “Cursed with a large fortune?” he repeated.

“Yes, indeed. You see, my father had no other children, and I believe I am most fabulously wealthy, besides having a house in Somerset, which they won’t let me live in. When he died I had to live with Aunt Almeria. I was only twelve years old, you see. And now she is persecuting me to marry my cousin Frederick. So I ran away.”

“You did quite right,” said Sir Richard.

Hijinks ensue, but then don’t they always with Heyer? There’s a stolen necklace, cutthroats, overturned coaches and assumed identities.

“Tutor? I thought you said he was your cousin?”

“My dear Cedric, do try not to be so hidebound!” begged Sir Richard. “I have figured as a tutor, a trustee, and a cousin.”

I would gallop on to spend an evening with Sylvester or A Civil Contract or Devil’s Cub, but there’s writing to be done. Oh well. I’d better pop The Corinthian back on its shelf.

7 thoughts on “Recountings: A Dash of Heyer”