This evening, I have a guest on my blog. Grab a cuppa, a blanket (because winter has been rude and the chill has arrived early. TOO EARLY, I TELL YOU!) and settle down as Hazel West tells me of Sutcliff, spiders and sequels.

Well, I started writing at a very young age (my first stories were about my pets actually) but I’ve been writing steadily for about the last 12 years or so, and surprisingly come up with a few novels that people seem to enjoy reading 😉 Among that time has been bad ideas, writer’s block, and stories that go no where, but that’s a writer’s life, right?

Coffee, hands down. Coffee is life.

If you could go back in time, what author would you have a dinner with?

Ooh, that’s a hard one. I think Arthur Conan Doyle would be on top of my list though. Not only did he write one of my favorite literary characters ever (even though he hated Holmes himself, haha) but he was just such an interesting person. Coincidentally, Doyle believed in Faeries 😉

Name one of your inspirations

I think an author who has inspired me most in recent years has been Rosemary Sutcliff. Her books are beautiful and often tragic, but are so true to life and I think reading her really taught me how to craft both historical stories with meaning and how to write epic mythological retellings.

How did the experience of writing An Earthly King differ from writing Blood Ties?

Sequels are hard. You’d think they would be easy since you know the story and characters, but they’re actually really hard sometimes. Getting back into a story but this time with a different storyline is sometimes difficult. Thankfully, AEK wasn’t quite as

hard as other sequels I have *tried* to write. I think the main difference was that I had to do a lot more research for this one. In the first book, I was mainly creating a world based off of one already there, but apart from that, I took major leeway with my version of the Goblins you see in the story. However, I wanted to take a more traditional approach in AEK when it came to the Faery Courts because there is so much awesome stuff in the lore you can use, so I did a lot of research into Fae lore and all that. AEK is also a loose retelling of the Tam Lin story, while Blood Ties wasn’t based off of anything in particular apart from the Fianna legends.

Which are worse – spiders or snakes?

I’m actually not truly opposed to either. I quite like my spider (minions) who live in the house as they eat any other bugs who come in. As long as they stay on the ceiling we don’t bother each other. Snakes I’m not so happy about. I don’t mind non-poisonous ones but deadly snakes will be hunted down with extreme prejudice. So I guess snakes is my answer haha 😉

If you could snap your fingers and have any book – from any time or place – with you now, which book would it be?

Any of the Rosemary Sutcliff books I don’t have. Some are so hard to find copies of. Also, an original hardback copy of Patricia C. Wrede’s Calling on Dragons to complete my collection.

Writing on paper or on the computer?

I used to write all my stories on paper and then transcribe them, but I just can’t do that anymore. Number one, I can’t read my own handwriting, for some reason, it has only gotten worse over the years haha. Plus I can type so much faster, and it doesn’t give you cramps when you’re trying to get an idea down fast. Me and my laptop (whose name is Spencer) make a good team.

Thank you for stopping by, Hazel!

Hazel West lives in Purgatory, er, Florida, with her books and her hedgehog Horatio. When she’s not writing, she’s reading other people’s books, studying folklore, or binge-watching something on Netflix—drinking coffee is also a given.

This post is a little late because, like Ginger in Paper Crowns, I’m off on an adventure I hadn’t quite expected. All right. I don’t suppose that America is quite like the world of fae, but … an adventure is an adventure, yes? Though, alas … mine lacks one very hilarious blue cat.

Today (or this evening, whatever the case maybe) I am very happy to present Mirriam Neal, who’s stopped by for a quick chat …

As always, the crucial question must be asked first: do you prefer tea or coffee? [or neither?!] Coffee. Always coffee. Black coffee in a large, irregular mug. I will never turn that down.

What has your writing journey been like? It’s been like most journeys – full of ups and downs and unexpected turns. When I started writing short stories about unicorns as a twelve-year-old, I never imagined I would end up as a published author. It’s been rocky, but always amazing.

How was the experience of writing Paper Crowns different to that of writing your first book, Monster? It was hugely different. Day and night different. Black and white different. Monster was blood, sweat and tears over several years; Paper Crowns was like eating dessert and took all of a month to finish (although all the editing added several months onto that). 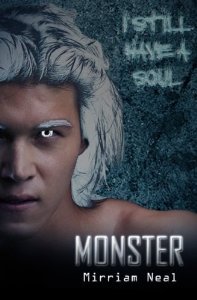 Monster hurt to write, but Paper Crowns never did. I guess that’s the difference between writing a novel on bioethics, and a faerie-tale for all ages.

What’s a book that you’ve recently enjoyed reading? I recently read Big Magic by Elizabeth Gilbert, and it falls right into the ‘life-changing’ category.

Would you rather share a meal with someone from a musical who would sing. about. everything. you. did (‘she’s frowning at the salad / oh yes, look / there’s a slug in the saaaaalad!’) OR a supervillain with one facial expression (a death glare) who may, or may not have slipped arsenic in your beverage? Assuming I have to actually finish this meal, I choose the supervillain. At the very least, a supervillain would be an interesting dinner partner. (And I may or may not have spent years building an immunity to arsenic.)

If you could have any fictional creature as a pet – what would it be? (Personally, I’d have a dragon. If it was tame.) A dragon with the ability to shapeshift into any form it likes. Is that cheating? (I don’t care if it is cheating, actually.)

you may find thingy things here: